At one point the people who run Hudson Urban Bikes, a bike rental company in the West Village, wondered what would happen to a bike if it was left chained to a post in the city for one year, and they took a picture of it each day to document its progress. The bicycle began its experimental journey equipped with all necessary equipment plus a basket, water bottle, splashguard and a few other goodies.

For quite a while the bike sits quietly chained next to a host of other bikes, retaining all of its accouterment. Then, on day 160 all of a sudden the water bottle goes missing. Then a few weeks later on day 212, both the lock and the basket walk off. From there things really begin to deteriorate, and it’s not long before the seat is missing, followed soon after by the front tire, splashguard, and handle bars. 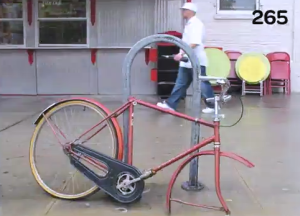 Finally the forlorn frame itself disappears. 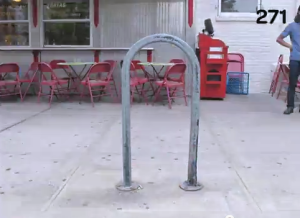 To my mind, this experiment cleverly mimics several aspects of dishonesty. People are basically fairly honest most of the time, but at some point they are tempted to cheat or take one small thing, or they see someone else do so. Over time this works through them, and maybe they take another small thing. After a while, this becomes habit, and people begin cheating at full throttle, and next thing you know, the whole bicycle is missing (figuratively).

That said, I think it bodes well that the bike lasted as long as it did, particularly after the lock was removed. It seems we can rest a little easier knowing that people, for the most part, don’t cheat as much as they could, or as much as we would expect them too, rationally speaking—after all, just think of how many people walked by the apparently free, unlocked bike and ignored it.